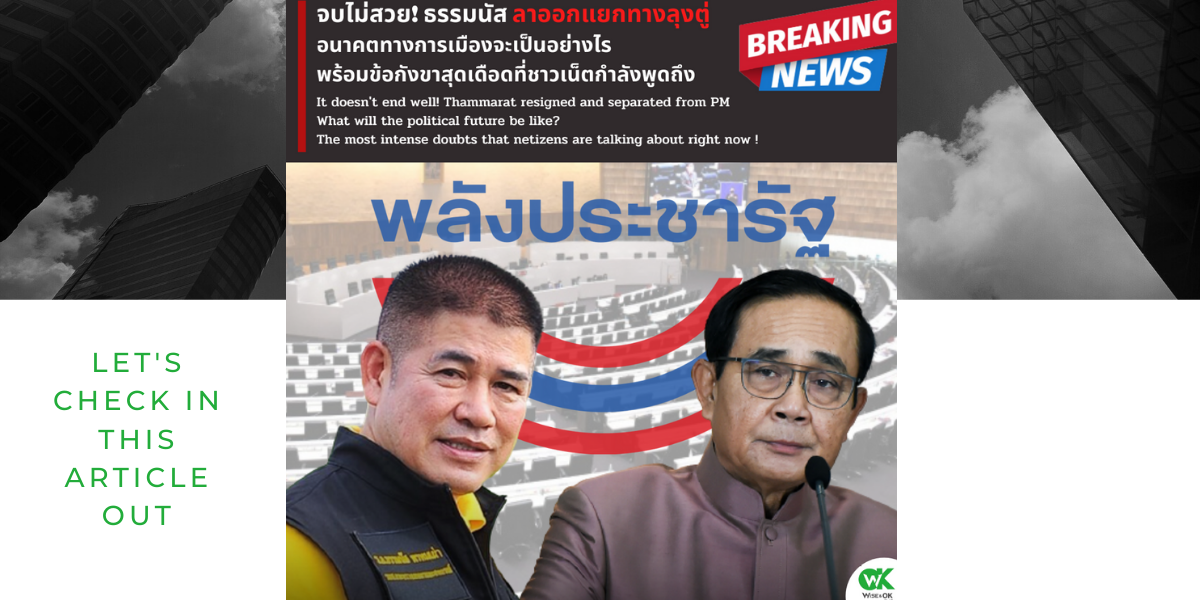 It doesn’t end well! Thammanat resigned and separated from PM  What will the political future be like? The most intense doubts that netizens are talking about right now!

It became a hot topic since the afternoon of September 9, after the Government website published an announcement to Capt. Thammanat Phromphao, Deputy Minister, of Agriculture and Cooperatives and secretary-general of the Palang Pracharath Party (PPC), including Mrs. Narumon Pinyosinwat Deputy Minister of Labor to be retired on September 8, which means that throughout the period after the end of the distrust debate in the parliament, rumors about Thammanat’s resignation appeared to be true. This resignation situation probably wouldn’t be an issue that was talked about a lot. If Thammanat is not another main character in a political game where Thai people and the country are at stake

By the message in the announcement of the resign from being Minister has stated that the Prime Minister has directly mentioned removing some ministers from being ministers for the sake of suitability and benefit to the government service. There is also the use of power under section 171, which netizens analyzed whether the use of such section means that Thammanat may be ‘discharged’ rather than ‘requested to resign’? In addition, some people took the old announcement that six former ministers resigned, which had different contents from that of Thammanat. However, during the period overlapping with the announcement published, Thammanat has issued a press conference with the media in the Parliament on the issue. Claiming that he intended to notify his resignation from September 8, but the personal secretary mistakenly thought to submit on September 9 instead. One of the reasons Thammanat gave to the media about his resignation was that he intended to work for the nation, religion, and monarchy. But throughout the period of his service, the atmosphere of working in the government state affairs didn’t go as expected. Therefore he wants to go back to the original point that is, being a member of the House of Representatives and want to make politics stronger really for the nation. As for the issue that had a misunderstanding with the 3P brothers, which consisted of Gen. Prawit Wongsuwan, Gen. Anupong Paochinda, and Gen. Prayut, Thammanat simply replied that he still respect them as the leader and the relationship with Gen. Prawit and Gen. Prayut are not broken. But Thammanat has already chosen his own path.

However, many parties are keeping their eyes on the future of Thammanat’s political path. Which he would like to return to start in Phayao Province which is his birthplace. In addition, Thammanat also hinted that many parties had approached him to join the party as well which he still takes some time to decide. And his position that is still in existence is the Secretary-General of the Palang Pracharat Party, he said that he is still want to be in this position and hasn’t resigned. However, when a reporter asked if he would return to the Pracharat Party’s office again, He just said that he won’t step on there, he don’t like that place and don’t want to force himself as well.

It can be said that Thammanat’s resignation press conference has left many political puzzles for society to analyze. Including various questions such as the compete for the prime minister’s position, since many people thought that Thammanat might come to replace Prime Minister Prayut or not. But in the end, it seems that Prime Minister Prayut is still firmly holding on to the prime minister’s chair. In addition, netizens and many media have returned to talk about the message that Thammanat had said in the year 2019 that “I am the blood vein that feeds the government’s heart, I keep secrets and negotiating deals If I fail, the government is shaken.” It really points out that there may be facts that we never know about or will be revealed in the future or not. As for the case, of white powder that is notorious for being involved in drug cases in Australia. Many netizens have proposed to reemerge the case to create clarity for society

In the end, the political game may have a deeper layer that we may not know about In addition, there is a matter of benefits, life, and death including the future of Thai people involved. What will the conclusion of this story be? Will new characters emerge as well? Or are there some people behind the scenes as well? We must closely monitor this issue.