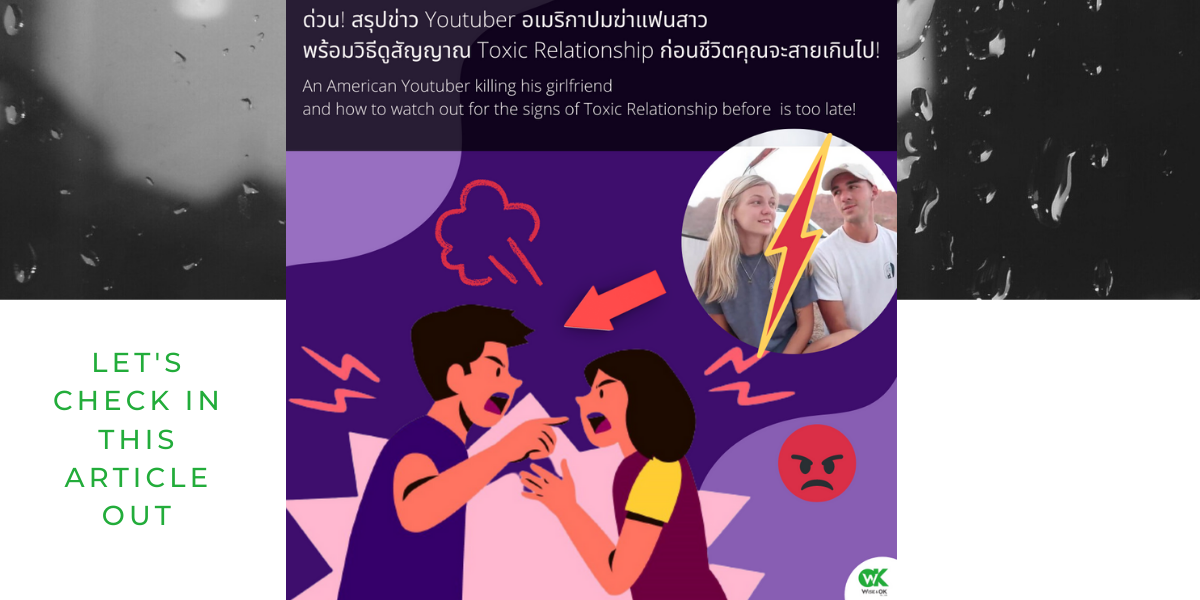 An American Youtuber killing his girlfriend

and how to watch out for the signs of Toxic Relationship before is too late!

At this moment, many people are eager to follow the news of the hunt for Brian Lundry, the young fiance of the famous YouTuber from the United States, Gabby Petito, just 22 years old. They have been on road trips together since last June. But the story turned out to be shocking when Gabby mysteriously disappeared before the FBI recently found her body. And the fiancée, who accompanied her on a trip has now been disappeared without a trace. It can be said that this event is full of clues and suspicious. It’s also a lesson for many couples who are in a toxic relationship. What will the story be like, WiSE & OK have gathered together in this article!

In June the two took a road trip together in the United States and everything seemed to go smoothly. Until police received reports of violence between the two in August. According to the report Gabby has told about her mental health concerns and frequently had arguments with her fiancé. On Brian’s part, he also stated that Gabby slapped him in the face after the two argued. In the end, the police did not prosecute the two of them. And both of them still upload videos on social media as usual. Until late August Gabby’s contacted her mother and stated that she would continue her journey to the Teton Mountains in Wyoming. That was the last talk before Gabby disappeared. On Brian’s side, he hitchhikes on his way heading for Jackson alone without Gabby’s. He returned home in Florida alone on September 1 and then on September 10, Gabby’s family notified the police that Gabby had disappeared. Soon after, Brian has becomes the first suspect in Gabby’s mysterious disappearance he also refused to cooperate with the police. By September 14, Brian also disappeared from his house. On September 19, the body of a woman similar to Gabby was reported to have been found in Wyoming’s national park. US forensic officials confirmed on September 22 that the body was Gabby’s and will continue to perform an autopsy to determine the cause of death.

This incident has shocked the whole United States and the world a lot. In addition to having to witness the loss of a woman’s life. Another thing that many have speculated that may be the cause of the tragedy was the toxic relationship the two were facing to the point of action. If someone has a partner and still does not know that they are in a relationship like this or not. So here are some signs of the Toxic Relationship that people with a partner should not overlook are as follows:

1) Being physically abused by your partner regularly

This is the most important sign because if they truly love us, they will not do anything to hurt our feeling or body. If the day they started to attack you. Let’s just say it might not be just this one time, they might do it over and over again, until it gets to the point of death. So if you are facing this kind of situation the best advice is to get away from this person immediately, because your life is more valuable than others to hurt you!

Many people have the mindset that being a girlfriend/boyfriend = owning their life, which is a very wrong idea because being a couple is about living together while still having personal space and giving each other freedom. This also causes many couples to be overly manipulative by their partner, such as ordering them to stop meeting that friend, being forced to dress according to their preferences, can’t hang out with other people. Even worse, some people even forbid their partner from doing the things they love, such as favorite hobbies. So if you realize you’re being overly manipulated by your partner. You should speak up and help to find solutions together. Otherwise, you will be taken advantage of and will be stuck with this toxic feeling forever.

3) Always finding a way to argue

Although quarreling is a classic problem that all couples have to deal with. But if you keep quarreling over the same issue or keep arguing for no reason and they also refused to agree on mutual understanding. You’re going to have to keep arguing like this over and over again. If you’re experiencing these kinds of situations I advise you to get away from this person as soon as possible, because you don’t want the rest of your life to be wasted on pointless arguments with these types of people, right?

4) We must always be the ones who agree

If you have to be the one who agrees with everything even though sometimes you don’t even have to agree with it but you want to keep the relationship going forward. This is another sign that you’re in a toxic relationship too! So if you still haven’t found a way to cope with this situation, in the future you will be more and more uncomfortable, and sometimes this can affect your mental state as well. Best of all, you shouldn’t always be the one who gives in especially in things that makes you uncomfortable. If they love you they won’t do anything to make you feel bad and they also need to help to keep this relationship healthy.

From Gabby’s case, you can see that we should not be complacent in a relationship that is toxic because one day the person you love may be the person who is the most dangerous to your life. Moreover, this kind of relationship is like a volcano waiting to erupt which no one knows when it will erupt. If you don’t notice your relationship problems and do not try to find a way to cope in the end when there is a problem it might be too late to fix it…

Thank you information from