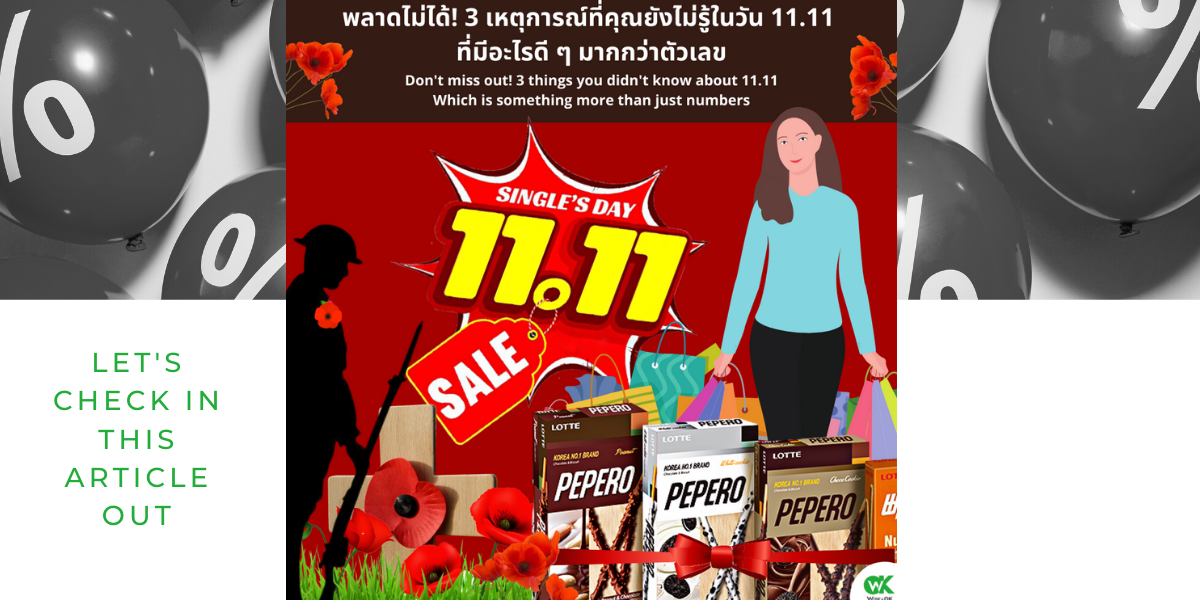 Don’t miss out! 3 things you didn’t know about 11.11, which is something more than just numbers

I believe that today, many people, especially people who love shopping, would be happy buying products that are having a huge discount during 11.11 because both small and large brands Including popular online selling platforms such as Lazada or Shopee have 11.11 promotional campaigns to attract a large number of customers. It can be said that this 11th day is considered a special day for many people. However, November 11 is not just a special day for the 11.11 market. But several events take place annually today as well. Let’s go and see!

1) It’s Singles Day in China, the origin of marketing campaigns that are popular all over the world

In China, 11.11 is regarded as National Singles Day. It started in the 90s when a group of Chinese students had fun hosting a Singles Day event on November 11th, where they saw the number 1 representing loneliness Guijie (光棍节). For the singles festival activities, students will buy gifts for themselves, go out to find something delicious to eat alone, travel alone because it is considered to give happiness to yourself without the need for a partner. In addition, there is also an event for single people to go on a date or to buy gifts for their secret crush during the singles festival as well. As such activities became more and more widespread, shops began to push out large-scale promotions for single people. It later became a large 11.11 discount event in China that even the giant online shopping platforms like Alibaba or Lazada turned to do marketing strategies on 11.11 as well. Last year, the PPTV Online website also reported that Lazada was able to make 1,000 million baht in just 2 hours! You can say that just a fun activity for singles in the university fence has turn into a  great marketing campaign that Chinese people and the world have been waiting for!

If you’re in Korea today, it’s going to be a very special day because November 11th is considered by Koreans to be Pepero Day, which is similar to Valentine’s Day in the West. The reason for the so-called Pepero Day comes from the candy brand Pepero, which looks like a stick with the number 1 in a row, 11/11. The beginning of Pepero Day came from a student giving Pepero candy which means thin to their friend to hope that friends will grow up to be in good shape like Peperos. So many people took the opportunity to express their love to their loved ones by giving them Peperos on Pepero Day.

3) Remembrance Day to remember the end of World War I

November 11 in countries such as the United States, United Kingdom, or Canada is regarded as Remembrance Day, a day in remembrance of soldiers who sacrificed their lives during World War I. It was also official, with the German Empire losing the war to the Allies. The events of World War I have damaged and traumatized many people, especially the families of soldiers who lost their lives in the war, so Remembrance Day is a day for everyone to remember the soldiers who sacrificed themselves. We will see many people wearing Poppy flowers on their shirts to pay tribute to the soldiers. There were also two minutes of standing still at various locations outside.

Some people may see today as a normal day just like any other day, but at the same time, November 11 can be a meaningful day for many people as well. It might be a day of big shopping to reward yourself for your hard work. It could be a day when you have a chance to spend time with your lover or family, or it could be a day where you’re about to start doing something new, whatever your plans are, WiSE & OK, hope 11.11. will be a great day for you!