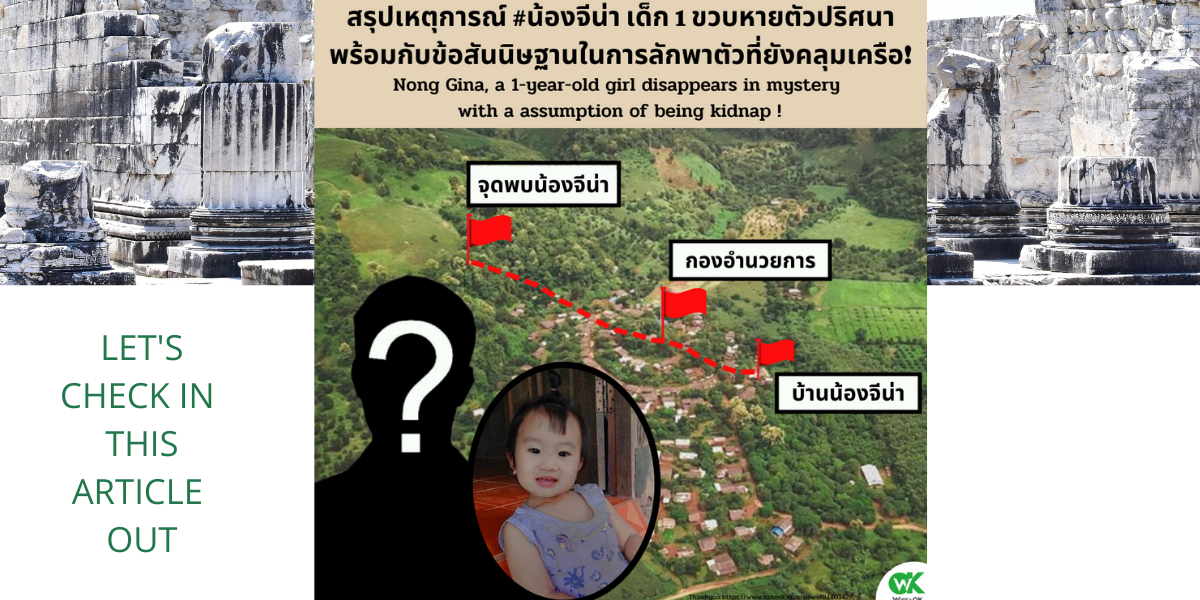 Nong Gina, a 1-year-old girl disappears in mystery with an assumption of being kidnap!

The story of #Nong Gina can be regarded as another story that Thai people are interested in and talking about at the moment. The incident came from a child aged 1 year and 11 months who disappeared without a trace from the area of ​​the house at Ban Huai Fa Dab, Moo 16, Inthakhin Subdistrict, Mae Taeng District, Chiang Mai Province, which is a village surrounded by forests. After searching for more than 2 days, Gina was finally found in a hut in the middle of the forest. However, the events did not end here, as there was a mystery from the kidnapping.

Back on September 5th, Mr. Suriya Wongsilarung, and Mrs. Malee Pasi, the parents of Nong Gina has filed a report to track down the missing child with the police at Mae Taeng Police Station, Chiang Mai Province. The missing person is Gina, a 1 year and 11 months girl, who previously played with a cat in front of her house. While Dad left the house, to take the trash out and mom is cooking while their four-year-old brother plays in the house. When they came back to look again, they couldn’t find Gina anymore. After reporting to the police rescue workers and volunteers, including villagers in the area help each other out to find Gina. From the first day of the search until the early morning of September 6, they did a search radius of about 2 kilometers, but there are no traces of Gina’s disappearance were found.

Until September 6-7, they began to search throughout the village again. By organizing a distribution unit to search on the ground with police dogs. Including flying a rescue drone to search from high angles and using police helicopters to fly around in suspect areas. Gina’s father came on the helicopter to go out to search with the police as well but still, no one found Gina. At the same time, the police detained a suspect, Mr. Xiao, a Myanmar national and a close friend to Gina’s family, for questioning. During which he was found suspicious because he claimed that when the incident happened he was at the next village fixing his bike. But when the police ask the repair shop, they confirm that Mr.Xiao did not come on that day. It was also found that Mr. Xiao was a foreigner who smuggled into the city illegally. The police then detained him and investigated him again.

After several hours of investigation, until September 8, Xiao finally confessed to kidnapping Gina. And given the reason that Nong Gina was to be a sacrifice to the forest god. He said that he left her in front of a cave, which is about 3 kilometers from the village, along with placing a banana with her. After that, the police rushed to search for Nong Gina around the village again. Including the cave area where Mr. Xiao confessed that he had left Gina. But the police did not find any traces. Until noontime, Mr. Jabu Sue, who is Nong Gina’s uncle, found Gina at a hut in the middle of the forest and near the villagers’ banana plantations. The condition of Nong Gina is that she is a bit dirty but there were no signs of any major injuries or starvation. After that, Nong Gina was taken to the hospital for further physical examination.

However, this incident did not have a definite conclusion. Because there are still many hidden clues about the kidnapping. Some assumed that this incident may be related to human trafficking or not. Because there has never been a case in Thailand about kidnapping a child to worship to god. Moreover, when the police went to the spot where Mr. Xiao confessed that he had left Nong Gina, they could not find her. But found her at the place where they have searched already. And assume that a 1 year old kid wouldn’t be able to walk to the hut by herself and live alone for this long. It is therefore expected that there may be more than one person involved in the incident. The Mirror Foundation reported on the case of Nong Gina that there may be other facts that are yet to be revealed. Therefore, we must follow the movements of the police and the authorities involved in the investigation to find out what happened next.