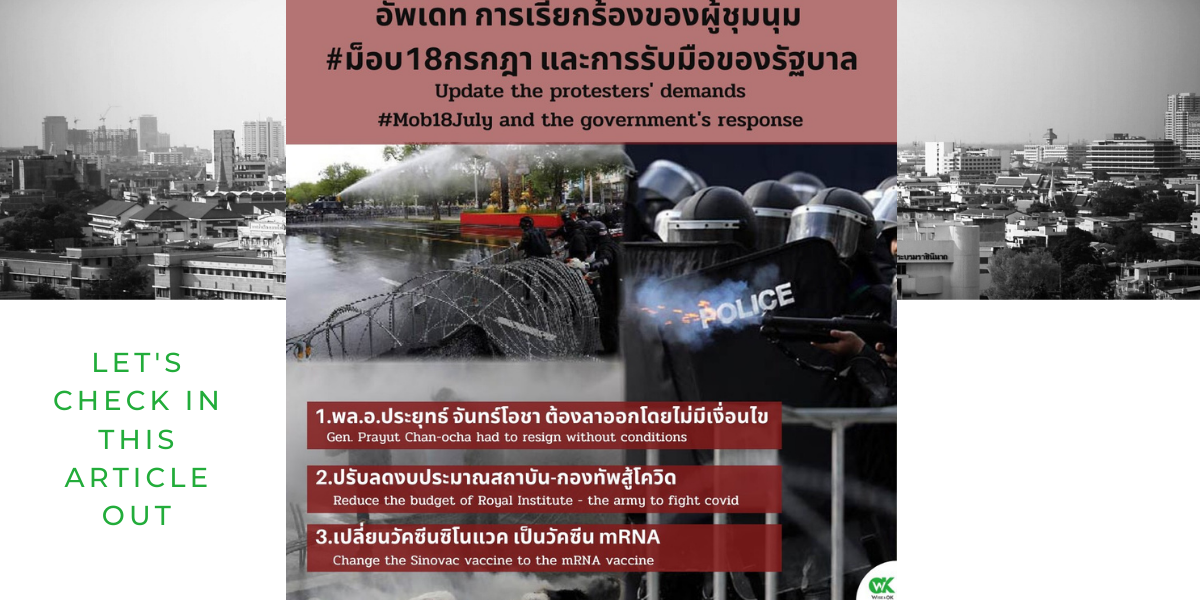 #Mob18 July and the government’s response

During the Covid situation in Thailand, the number of new cases and deaths is increasing almost every day. Moreover, the provision of effective vaccines has been delayed and there is no clear conclusion, despite the coronavirus pandemic spreading for several months. This problem has taken the lives of many Thai people. So right now many people have had enough with the government so they came out to protest in hopes of a change in Thai society. Therefore, the #Mob 18 July event is the latest movement that has occurred in Thailand.

On July 18, pro-democracy groups led by the Youth Liberation Group along with 15 other groups and large crowds gathered around the Democracy Monument at 2 p.m. before marching to Government House. To call on the government to act on three demands, which are 1) Gen. Prayut Chan-ocha must resign without condition 2) Reduce the budget of Royal Institute – the army to fight covid 3) Change the Sinovac vaccine to the mRNA vaccine. The public believes if all three demands are successful it will help Thailand go through the crises this time. In addition, there were many symbolic expressions inside the rally, such as bringing out a large number of straw puppets to show how many lives the government has killed. There is also the hashtag #Mob18 July to update the situation and let many Thai people come out and show their stand against the state through the online site. The first protests were peaceful and then the mob starts moving to the Government House, the destination of this protest. However, on the side of the crowd-control police, they prepared a response by placing a barbed on the way causing the mob to dismantle the barbed wire. Until finally the police started spraying water to disperse the mob. Even later, they also started using rubber bullets on people and followed by large amounts of tear gas. Until the mob had to change directions and finally arrived at the Government House area. But in the end, the police continued to use tear gas to block the protesters. Police responses like this have resulted in large numbers of citizens and media injuries. At about 6.32 p.m, the leaders announced the cease the protest.

This incident shows how desperate people are to the point of taking the risk of protesting during the coronavirus pandemic. But if they don’t come out, they don’t know how long they will have to endure this terrible quality of life. Some have blamed the individual protests for worsening the economy. However, there is a study by Pongsak Leungaram, Faculty of Economics, Chulalongkorn University and Yuttana Setthapramote Faculty of Economic Development National Institute of Development Administration on the Economic Cost of Political Uncertainty in Thailand. Which they pointed out that Protests are not the only factor in the country’s economic downturn but also in conjunction with other factors, namely the state of emergency or the proclamation of martial law, dissolution of parliament or elections, revolution or coup, and political reform or constitutional amendment. Therefore, the mob cannot be accused of destroying the economy. Moreover, foreign investors are concerned about the political events in Thailand. If the state does not have a transparent and efficient administration of the country. In addition, if there is no good political stability It will affect the long-term investment decision of foreign investors. And they may decide to move their investment to another country instead. Moreover, the government’s response to COVID will be another important catalyst for investors to make decisions. If people who have to become key workers in foreign-invested industries have not been fully vaccinated. There would be no foreign investors who dare to risk investing in opening a business in Thailand.

However, although the protests ended yesterday but another thing that reflects is that even though the total number of people infected with COVID has surpassed ten thousand. But they still decided to come out and demand to protect the interests that all Thai people should have and will not tolerate this rotten manage from the government. In addition, some entertainers also came to call out as well. For example, Focus Jeerakul, a Thai actress, posted on Facebook  “I asked for a vaccine but got a rubber bullet”, which reflects that the state and the Thai police can give to the people would be only violence. And after this, how will the protests continue? Will, any new moves be coming soon, or will there be a lockdown to prevent both mob and infection? Please look forward and don’t forget to keep following the WiSE & OK page!