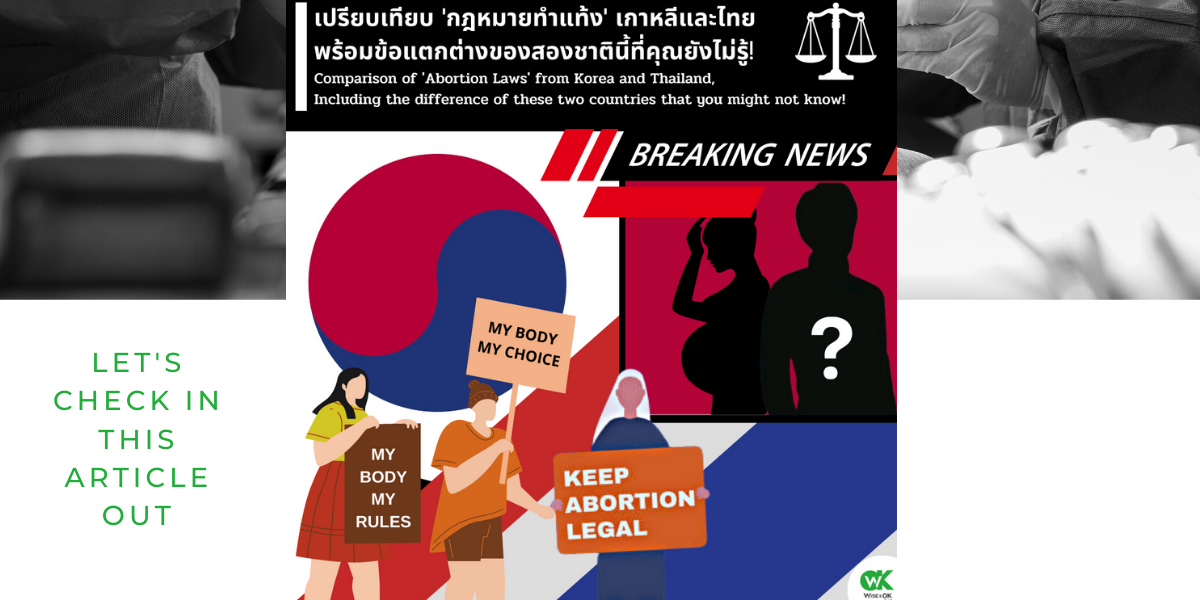 Comparison of ‘Abortion Laws’ from Korea and Thailand,

Including the difference between these two countries that you might not know!

Abortion has been a long-debated issue in society as to whether women deserve the opportunity to decide their own path in ending the pregnancy. Today we see that many countries are becoming more aware of women’s rights and amending their laws to meet the needs of the people in society. According to the report by the PPTV HD36 news agency, there are only 5 out of 202 countries that the law states that abortion is illegal in all cases, including the Dominican Republic, El Salvador, Nicaragua, the Vatican City, and Malta, while 67 other countries can have abortions under certain conditions. ‘South Korea’ and ‘Thailand’, these two countries have recently amended abortion laws around the same time in 2020 and 2021, and have become a major turning point for women in both countries.

According to the report of the Thai PBS news agency reported that South Korea is regarded as another country that has had a ban on abortion for almost 66 years, and women who have abortions can face fines and imprisonment except in the case of rape, having sex with family members and where pregnancy can risk the health. And there is a prison sentence for the doctor who performs the abortion as well. That means that in the past 60 years, a handful of South Korean women who have had unplanned pregnancies have been faced with a destiny that had no choice and could only allow the pregnancy to continue. However, South Korean women still secretly perform abortions despite being illegal. It was reported that in 2018 there were as many as 50,000 illegal abortions. Finally, on April 11, 2020, the BBC news agency reported that the Korean Constitutional Court had announced that the law banning abortion would be changed and within the year 2020  this law officially states that Korean women have the right to have an abortion. However, if the pregnancy is over 20 weeks, an abortion cannot be performed because it will still be considered illegal.

In Thailand, abortion is a delicate matter and it is contrary to religious and moral principles Despite the amendment of the criminal law to allow Thai women under 12 weeks of pregnancy to have a legal abortion. But that still goes against the rights of women, equality, and gender justice in society. The BBC news agency reported that the Constitutional Court has ordered to amend the Criminal Law Sections 301 and 305 as follows: Article 301 allows women to have an abortion within 12 weeks of pregnancy without offense and add other exceptions that will benefit women to have a safe and unlawful abortion. And in the section of section 305, the exclusion of the offense of a person who causes abortion or those who cause a woman’s miscarriage by a woman’s consent will not be guilty if it is the action of the doctor. And it has to be done because of the health problems of pregnant and pregnant women from sexual offenses.

From the laws of both countries, It can be seen that the two countries place greater emphasis on women’s rights. And is ready to amend the law to comply with the demands of people in society that want women to have the right to terminate their own pregnancy if they are not ready. In addition, both nations share similarities in terms of religion and beliefs involved in abortion. But there are groups of people who disagree with abortion, they see it as wrong with religious belief to not want to kill people because they believe that what is in the womb is a living person. However, what is different is that 1) the duration of abortion in Thailand takes less time than in Korea, that is, Thailand can abort a pregnancy at 12 weeks, while in Korea it must abort within 20 weeks. These different lengths of time can affect the safety of a pregnant woman if abortion is nearing its end. Therefore, it is necessary to be diagnosed and closely supervised by medical personnel and 2) the welfare of the child, in which Thailand provides child allowance to insured children only 800 baht per month until they turn 6 years old, while South Korea the government will give about 8,195 baht per month to all babies from birth until 24 months, while children under 7 receive a bonus of 2,712 baht per month. The difference in this point is shown that even if an unprepared pregnancy occurs but the Korean government still provides financial support for children which is more than Thailand. And at least enough to buy the necessary things for the child.

The reason most women want to have an abortion is because of the ‘economic conditions’ that they are not ready to take care of the child that well. Plus, many people get pregnant at an early age and are due to mistakes or ignorance of birth control. Therefore, they should have the opportunity to end this pregnancy before they have to deal with many problems in the future. From the example, we can see that unplanned pregnancy and giving birth to a child unwillingly will be difficult for parents, families, and society. In the economy, there will be an increase in medical and public health costs from the government having to provide services to children born from adolescent mothers. In addition, according to a report in Thailand in 2011, it was estimated that adolescent pregnancy in Thailand will have an economic impact of approximately 3,088 million baht. For the social part, it is extremely worrying because pregnant women have to drop out of school or university due to unable to withstand social pressure and this may affect their mental health in the long run. In addition, the quality of life of the family may also deteriorate. There is also a problem of many babies being abandoned. This is due to unplanned pregnancies and abortion was once illegal. So whether it’s South Korea or Thailand matter of abortion is remains an issue that will continue to be closely monitored as to whether changes in the law will be better and more favorable to women. But what we can see from this is that every woman should have the right to her own body.

Don’t miss out! 3 things you didn’t know about 11.11 Which is something more than just numbers
November 11, 2021
LATEST ARTICLES
CONDO LISTING
Go to Top