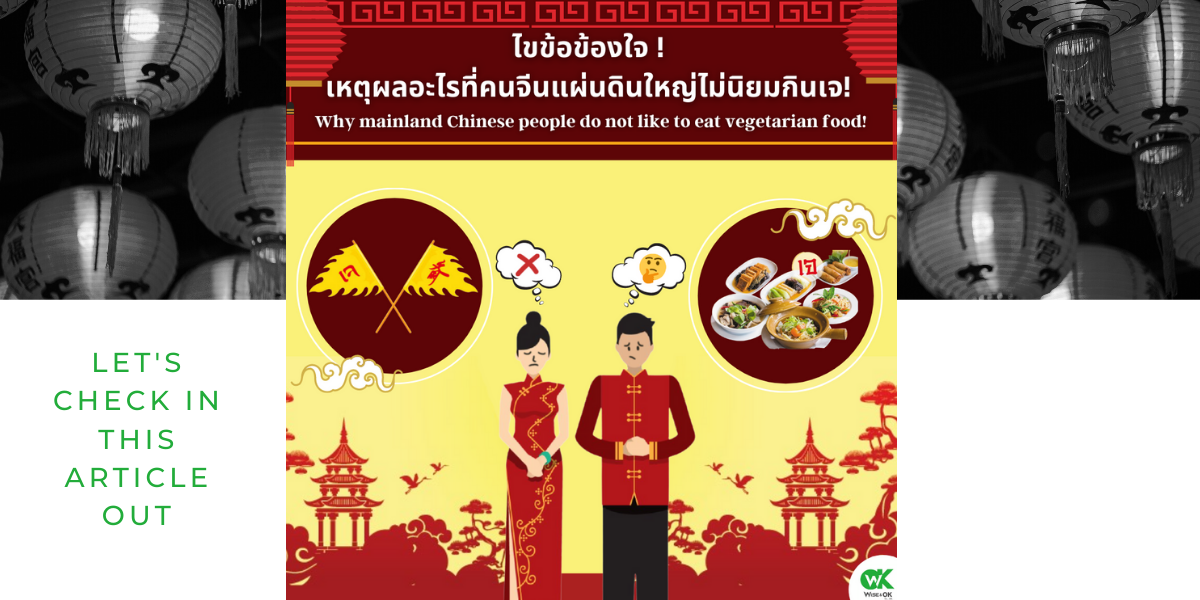 Why mainland Chinese people do not like to eat vegetarian food!

We finally arrived at the festive season filled with the atmosphere of many yellow-flag restaurants. Which is a symbol of vegetarian food that Thai people have been familiar with for a long time. ‘Vegetarian Festival’ is a big festival that many Thai people are looking forward to. Especially the Thai people of Chinese descent because it is a tradition that their ancestors practice and has been passed down for many generations. However, if we travel to mainland China we will find that mainland Chinese people do not like vegetarian food. Plus, some people don’t even know about this festival! Today, WiSE & OK would like to take you all to explore the reason why vegetarian festivals originated from China but mainland Chinese people don’t actually eat!

As we all know, China is the 3rd largest in the world and has a population of many ethnic groups in many cities and provinces across China. Therefore, it is undeniable that each city has its own unique culture. Whether it is the dialect, dress, religion, way of life, as well as various customs as well, in Fujian Province, located in southeastern China. There are the Hokkien and Chaozhou Chinese residents and It is said that the vegetarian tradition originated from this group of Chinese people. Later, when the Chinese began to migrate out of China in search of new territories to start their good lives. They also don’t forget to bring their culture with them. Therefore, the beginning of the Thai Vegetarian Festival began with a group of Chinese immigrants who settled in the southern part of Thailand.

In China, there is still a small group of Chinese people who have the same vegetarian festival. But it’s called ‘the celebration of the nine kings’. However, during the Cultural Revolution of 1966, the Communist Party of China led by Mao Tse-Tung launched a cultural revolution in China. Which has destroyed the culture, learning style, ideas, customs, religions, and beliefs that have been passed down for a long time. Moreover, anyone who refuses to do so is considered against and hostile to the communist government. Therefore, the Chinese people had to abandon their traditional culture in order to survive. And this has become a major reason why the vegetarian festival, which is considered one of the traditional cultures of some Chinese people, is gradually disappearing. Until now, we hardly see any mainland Chinese people eating vegetarian again.

3 things you didn’t know about ‘Beauty Standard ‘that is hurting you
September 29, 2021
LATEST ARTICLES
CONDO LISTING
Go to Top