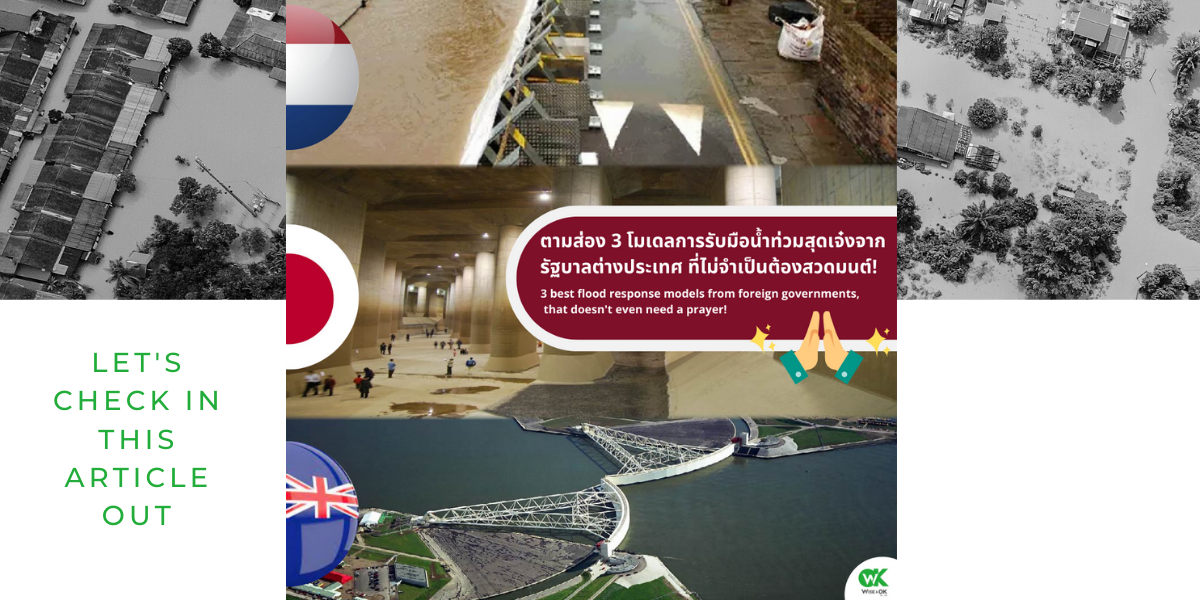 3 best flood response models from foreign governments, that doesn’t even need a prayer!

Recently, many areas in many provinces in Thailand especially in the upper central and northeastern regions were affected by the Dianmu typhoon which caused heavy rain and flooding. As a result, many people have been affected some provinces, such as Lop Buri, have ordered the evacuation of people because the water began to flow into the village. The height of the water is almost 2 meters high. Many people are worried that this flood will repeat with the 2011 flood or not, if not handled well enough. In many countries that are often exposed to heavy rain regularly like ours. They have created a flood response model that is very interesting and should be modeled for other countries to follow.

In a capital city like Tokyo that has much more densely populated than Bangkok, It is also the capital city by the sea as well. In the past, Tokyo often faced the problem of flooding which in some years storms have cause a lot of damage to houses and people died or even got lost. The Japanese government realized that if it continued like this, it could cause enormous damage to the city of Tokyo. Therefore, in the year 1992 onwards, the Japanese government began to build the Metropolitan Area Outer Underground Discharge Channel, known as the giant Katsukabe Tunnel. Which is hidden in the city of Tokyo, it is said that the Japanese government spent almost 100 billion baht in building this giant tunnel. It also took up to 14 years to complete the construction in 2006. The giant tunnel system, Katsukabe has a total length of about 6.3 kilometers, consisting of 5 water tanks and each bar is as high as 70 meters. The mechanism of its work is when it rains the rainwater will flow along the small river and these rivers will flow together and be drained into tunnels through large water tanks. After that, the water is pumped through an underground water tunnel and runs through the tunnel linking it to the first water tank, which is the water tank at the end and has a 13,000 horsepower pump to pump the water before draining. Exit to the Edo River to continue draining into Tokyo Bay. It can be said that this giant tunnel has become an important work that engineers from all over the world must come to see and study. This tunnel has become the hero of Tokyo many times when the storm hits making Tokyo less affected by flooding.

New Zealand is another country that faces many disasters, such as volcanoes, earthquakes, floods, etc. due to its island state and abundant rainfall. This makes the New Zealand government need to be prepared for disasters that could happen at any time. In the case of flood protection, New Zealand invented the Flood Barriers, which are installed 24 kilometers along the river’s shoreline, Flood Barriers are unsuitable for dealing with huge waves. But the highlight of it is that it can help slow down the flooding or flow into the house. It also adjusts the height of the barrier according to the amount of water that starts to overflow. This will give the New Zealanders time to prepare to store equipment in the house and be prepared to evacuate if water starts to overflow. Flood Barriers are also popular in many countries such as Australia, the United States, Europe, etc.

When it comes to a country that has been facing floods for thousands of years, Netherlands is inevitable. In addition to the terrain where three large rivers cross the country, much of the Netherlands is still below sea level. As a result, in the past, the Dutch people had to face floods at almost every stage of their lives. However, the Dutch chose to learn and find solutions and prevent floods. One of how the Dutch government’s masterpieces can be said is the Delta Work project, the largest water management project in the world and comprised of numerous sub-projects. To build infrastructure for use in water management and flood prevention. Examples of water management engineering work in this project are the construction of a giant wave barrier. Which can prevent waves as high as 5 meters that will block the seawater from flowing into the residential area when storms or strong winds occur. It is said that this project will not only help solve the problem of flooding in the Netherlands it will also benefit farmers in the area as well! In the future, if our country has a plan to develop water management. The Netherlands would be one of the first countries that should be traveled to study and adapt to our country.

Catastrophic events such as floods have been happening for hundreds and thousands of years. Each country has to learn and study from each event that happens and learn how to deal with problems effectively. However, coping at the national level also depends on several factors, including geography, innovation, government policies, budgets, and cooperation from relevant agencies. If there is no development or rush to built infrastructure that helps manage enough water. Plus, still telling people who are in trouble to pray to prevent the storm from coming in. The flood problem will never end.

3 things you didn’t know about ‘Beauty Standard ‘that is hurting you
September 29, 2021
LATEST ARTICLES
CONDO LISTING
Go to Top