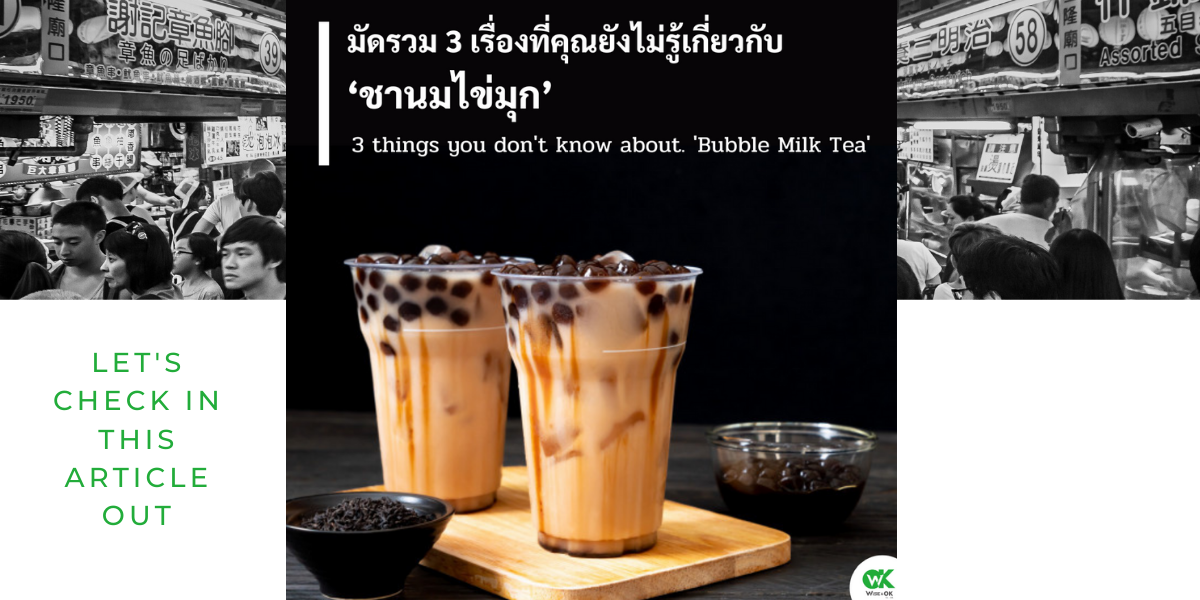 If you talk about the “popular drink” of Thai people, it can be guaranteed that there must be a name for “Bubble Milk Tea”. Nowadays, we can see bubble milk tea shops almost everywhere. They’re even sold at the train station or on the subway! The reason that bubble milk tea has been popular among Thai people for a long time because it tastes delicious and the bubble is very chewy. However, the bubble milk tea has other interesting stories besides the deliciousness as well. This article is a collection of 3 things that you did not know about ‘bubble milk tea’. If you are ready, let’s go see it!

Taiwan is regarded as the birthplace of bubble milk tea. The first shop to sell bubble milk tea was Chun Sui Tang (Taichung City), which is now expanding all over the world including within Thailand. The idea of the invention of bubble milk tea came from when Liu Han-Chieh, the shop owner, went on a trip to Japan and saw the Japanese drinking coffee with ice. So she tried to put ice in the Taiwan iced tea and after that, her iced tea became very popular among Taiwanese. Later in 1988, she was eating Fen Yuan, a Japanese mochi-like dessert. She was fascinated by the idea of ​​what it would be like to put this dessert in her iced tea and the response is very good. In the end, tapioca was processed to look like Fen Yuan, and it became the ‘bubble’ that has been put in bubble milk tea ever since.

2. The country that has the largest bubble milk tea consumer in ASEAN

Back in 2020, the hashtag #MilkteaAlliance has been on the top of the popular trend in Thailand for several weeks. The name of this milk tea alliance is not talking about bubble milk tea. But it’s a talk about international politics! Milk Tea Alliance is a movement in the online world of people who support democracy. Which started from the fact that Thais view Taiwan as a country while the Chinese people see Taiwan as only part of China. Causing a fierce response to the online world and there are people of Taiwan and Hong Kong to participate in this online war. Joining together as an alliance between the three countries was formed. By using a common thing like ‘Tea’ as a link between them and eventually becoming the name of the milk tea alliance. Today, the Milk Tea Alliance is not just about Thailand, Taiwan, Hong Kong, but it also allows people from other areas who want to call for democracy and anti-dictatorship to join the alliance as well.

You can’t believe that bubble milk tea can have such a great story! If anyone is looking for new business opportunities, selling bubble milk tea is another business to keep an eye on because it has been a popular drink among Asians and also targets customers of almost all ages. And if you have new ideas for adding value to bubble milk tea you can assure you that your business will definitely stand out!