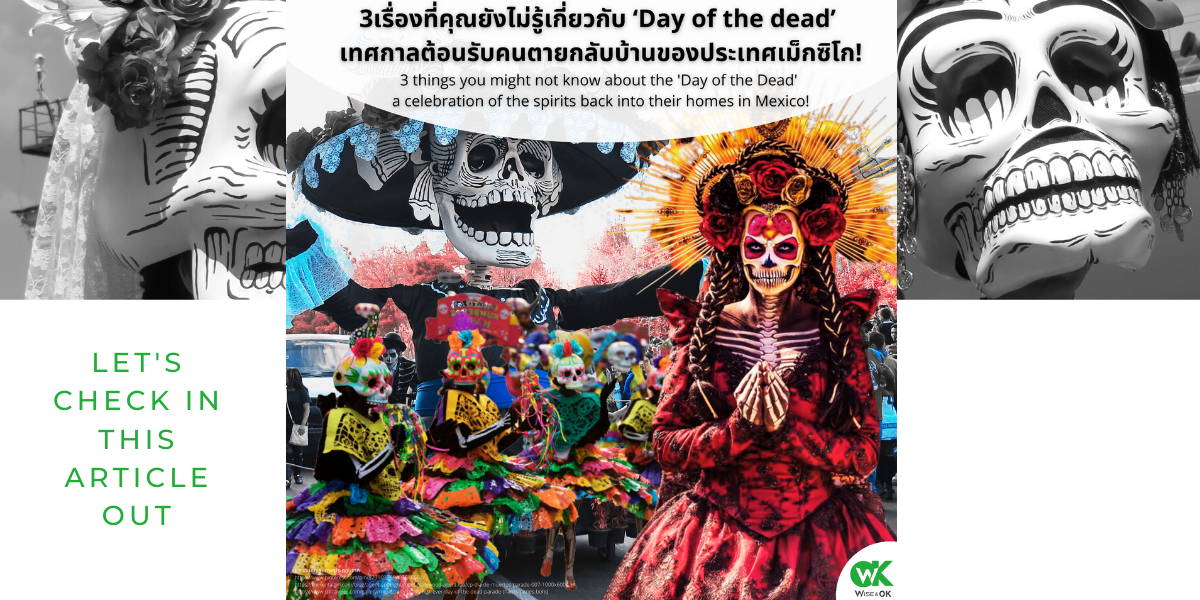 3 things you might not know about the ‘Day of the Dead, a celebration of the spirits back to their homes in Mexico!

When we talk about ‘skeletons, skulls, spirits, and death’, many people might view these spiritual things as frightening, unfortunate, or something that should not be talked about because it could lead to a catastrophe in the future. Nevertheless, for Mexican people and other Latin countries, the skull represents the cycle of life and the celebration of life and death. Plus, death is not the end of life but the beginning of a new life in another world. Today, WiSE & OK would like to present to you guys about 3 things that you might not know about the celebration of welcoming the spirits back into the realm of the living in a version of Mexican. If you are ready to check this out, let’s take a look together!

1.It’s a ‘celebration of life’, not sadness or mourning for loved ones who have passed away

Day of the Dead known as Dia de los Muertos in Spanish, is a festival held to commemorate the deceased family members or relatives between the night of October 31st and November 2nd of every year. Those spirits are believed that they would follow on a path of orange marigold flowers from the tomb which is the way that brings the spirits back to homes to celebrate with their living descendants again.

The purpose of the festival is to celebrate and commemorate loved ones who have passed away. It is not a mourning day when people are grieving to the loss of someone that you love. According to the Aztec, an indigenous group in central Mexico, the perspective on the afterlife is that “death brings new life” and that is the life cycle of all things.

For Mexicans, death is definitely close to everyone but doesn’t have to be so scary. For this reason, there is no surprise that the Day of the Dead becomes a day of enjoyment, parties, dances and music with living descendants and ones who have passed away. For example, a party in the graveyard. Family members will be gathering at the cemetery and doing family activities together, such as cleaning the cemetery, decorating the graves with flowers, listening to the music that the dead people like, and socializing next to the graves of their relatives and loved ones. The same as in the house, there will be a small party as well as altars which are adorned with pictures of loved ones, deceased’s favorite food and drink. Therefore, the festival of welcoming the dead people back to the earth in Mexico is a day to celebrate a new life for the deceased family members with happy vibes, remembering the good times we spent together, and celebrating their new journey in the world of afterlife.

2.Similar but yet ‘different’ between the Day of the Dead and Halloween

Although both festivals are held at the same time and have the same idea that spirits of the dead would return to the earth again. However, many Mexicans believe that their festival is not the same as Halloween due to different traditions, beliefs and attitudes towards death. As Halloween, the aspects of death are scary and frightening. Spirits of the dead are evil and they will come back to possess people in order to be alive again.                                   In addition, dressing up to look like a ghost, wearing costumes and putting pumpkins around the house are to frighten the bad spirits away. The Day of the Dead in contrast, is a day of love, remembrance and honor to the loved ones who have passed away by celebrating with joy and happiness.

3.A female skeleton ‘Catrina’, a form of resistance art as social satire

Catrina, a female skeleton wearing a fancy hat with feathers as well as an elegant dress, which is considered as one of the most recognizable symbols of the festival to welcome the dead people, drawn by the Mexican political cartoonist Jose Guadalupe Posada. Catrina was created as a satire of the Mexican social class who chose to embrace European culture in terms of an aspiration to look wealthy like the westerners. Death on the other hand, everyone is equal regardless of social class, occupation or status. Therefore, there was a question about Mexican society back then why we had to follow Western culture. Because in the end of our lives, we are all skeletons and would end up dead in the underground.

Although the Day of the Dead has its own ritual that dates back 3,000 years ago, many parades and skeleton costumes have just taken place after 2015’s James Bond 007: Specter. The scene of the parade in the movie is actually a fictional story created by the film writers. Moreover, there are also the animated films called the Book of Life and Coco, which the theme of the movies is the Day of the Dead. After all these movies hit the big screen and people started talking about the spectacular parade, the Mexican government immediately turned this golden opportunity into a tourist selling point by making the event in each year even more spectacular and marvelous!

However, the celebration of the Day of the Dead still keeps developing and evolving, but the heart of the tradition and ritual have been passed down and preserved for thousands of years. Also, opportunities to spend time together with family, celebration, remembrance, honoring ancestors and thanking them for what they have done to their families. Besides, the festival shows the perspective of death in a positive way. If all human beings understand the truth of life, sooner or later we all have the same ending which is “death.”   Death is not as scary as the living ones choose to forget the good times and memories that we have together or the worst case, forgetting the existence of loved ones. Therefore, if you don’t want to become a meaningless soul, you should always remind yourself that time is precious. Enjoy the rest of your time with your loved ones and don’t let time pass you by until everything is too late to apologize…

DAY OF THE DEAD https://dayofthedead.holiday/

Don’t miss out! 3 things you didn’t know about 11.11 Which is something more than just numbers
November 11, 2021
LATEST ARTICLES
CONDO LISTING
Go to Top