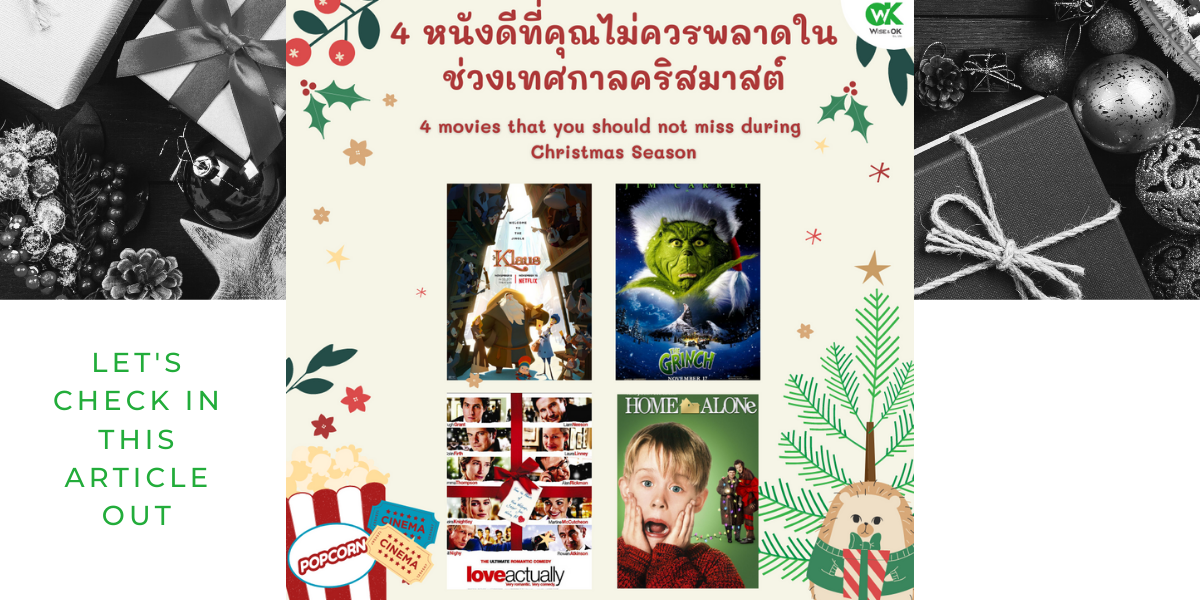 4 movies that you should not miss during Christmas season

Only 2 more days left until Christmas the happiest season of the year. Many people have a plan to go out with friends, boyfriend/girlfriend, or family. But for people who don’t know what to do this Christmas, we have activities such as watching movies to recommend. To make you enjoy the Christmas season even more! Let’s just say that these 4 movies that I have selected are going to impress you.

If we mention Immortal love movies of all time that we need to watch during Christmas everyone will definitely think of ‘Love Actually’. The story tells about the love of many people, such as love in the workplace, love from a different language, family love, or even a sad love triangle. Which each character will meet with different situations. The special feature of this movie is that it uses a Christmas theme which will allow us to enjoy the excitement of the characters during this festival. It is possible that Christmas has given us the courage to do something for our loved ones, just as the characters in the story do.

Many of you probably have seen Home Alone before. This hilarious comedy has become a Christmas hit, like many others. The summary of this movie is a young boy named Kevin fought with his brother on the day before leaving for Paris during Christmas. Kevin was grounded and with his childish heart, he asked Santa to wish his family gone. Turn out on the next day his family left for Paris but they have forgotten him at home. Causing Kevin to stay home alone and this became the beginning of the chaos in the story when two thieves will break into his house. The little boy had to find a way to survive, so a funny story between the little boy and the thief happened. If you watched this movie, I can guarantee that your Christmas will be filled with smiles.

When it comes to Christmas season, we will all enjoy watching a loving and cheerful movie. But this year why not switch to a comedy movie about a grinch a green creature living in the mountaintop who hates happiness. And even worse Christmas day!! so he decides to ruin Christmas for the cheery citizens of Whoville. But his plan finds a hitch when he encounters the endearing Cindy Lou Who. Sound fun, right? Why not try watching it this Christmas with your friends and family. I’m sure that you will enjoy and have a great time.

Santa Claus! there are so many myths and stories about him but this heart-warming movie is told in a new and refreshing way. This story is about Jesper a student from a postal academy who was sent to stationed on a frozen island above the Arctic Circle. He was assigned to create a functional postal service but people in that town don’t care about sending or receiving a letter because they hate one another! But when he was going to give up, he met a local teacher Alva and discovers Klaus a mysterious carpenter who lives alone in the cabin full of handmade toys. This unexpecting friendship turns out to be a great story of laugher and tear. I believe that Klaus is the holiday movie that should be added to the list of December movie traditions.

Thank you information from

An American Youtuber killing his girlfriend and how to watch out for the signs of Toxic Relationship before is too late!
September 24, 2021

Pros and cons of Remote Working  A new trend of working during the covid era
September 22, 2021

Things you should be aware of from hashtags #Suicide terrorism that the Japanese embassy issued a warning!
September 17, 2021

Get to know Nomikai, the culture of drinking after work from Japan, that’s not just a casual gathering!
September 15, 2021

It doesn’t end well! Thammanat resigned and separated from PM What will the political future be like? The most intense doubts that netizens are talking about right now!
September 10, 2021

Nong Gina, a 1-year-old girl disappears in mystery with an assumption of being kidnap!
September 10, 2021
LATEST ARTICLES
CONDO LISTING
Go to Top