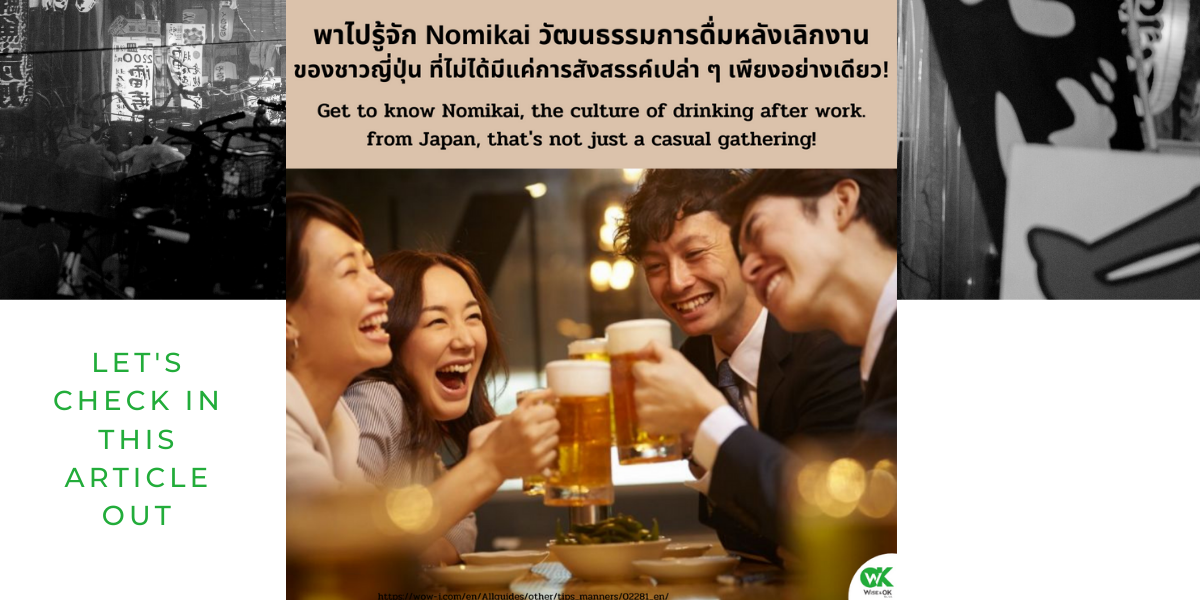 Get to know Nomikai, the culture of drinking after work from Japan, that’s not just a casual gathering!

Japan is regarded as another country that gives great importance to work and organization. Even after work, there must be activities that build relationships between people in the organization together. One of them is ‘Nomikai’, which is the drinking culture of office workers in Japan that is not just for casual gatherings, but during the Nomikai there is also a matter of work and the relationship between bosses and coworkers. So today, WiSE & OK would like to bring everyone to know more about Nomikai. This is very useful especially for those who want to work in Japan!

The Nomikai culture is after-work drinking that is usually set up at restaurants or izakayas. The word Nomikai comes from two words, nomi, meaning drink, and kai, meaning gathering or meeting. When they come together, it means gathering for drinking. Many Japanese office workers need to join Nomikai because it is considered a traditional culture and honors the company or the person who invites them. Therefore, Nomikai’s main goal is not just to drink but to dissolves the behavior of the boss and colleagues. Sometimes during work, there may not be a chance to talk about work or there may be a wall between them. So drinking gives them a chance to say what’s on their mind. Sometimes what is said during the Nomikai can have a positive effect on the work because each person will know the opinions of the other and possibly come up with new ideas after that. Some people may not dare to talk to their boss even in personal matters. But when they drink together, they may be more open to consulting or seeking advice from their supervisors on various matters.

However, looking at the other side of the Nomikai, it was found that there was still some awkwardness and lack of independence. It is true that Nomikai is not a rule that everyone has to participate at all times. But in fact, many juniors do not dare to refuse their boss because of fear of being viewed badly and insulting the company. Many people who do not like drinking alcohol or want to spend time doing other activities after work are forced to join Nomikai. Japan also values ​​seniority which means if you’re the youngest person out there. You have to serve other people all the time and you can’t even go home early! In addition, Nomikai has caused many Japanese people to suffer from alcoholism, which has a negative impact on their health. As for the family, many housewives have to accept that the husband may not have much time because in addition to having to work during normal times. At night, they have to go have a drink with coworkers again. Especially if the husband came home being drunk there may be a potential for bodily harm due to intoxication, which will later cause family problems.

It can be said that Nomikai is a culture that has long been deeply rooted in Japanese working society. If people are absolutely against it or want to cancel, it will still not be possible. However, organizations are increasingly adjusting and considering the suitability of Nomikai, this may be a good sign that in the future, Nomikai drinking may be more flexible and less pressure for employees.