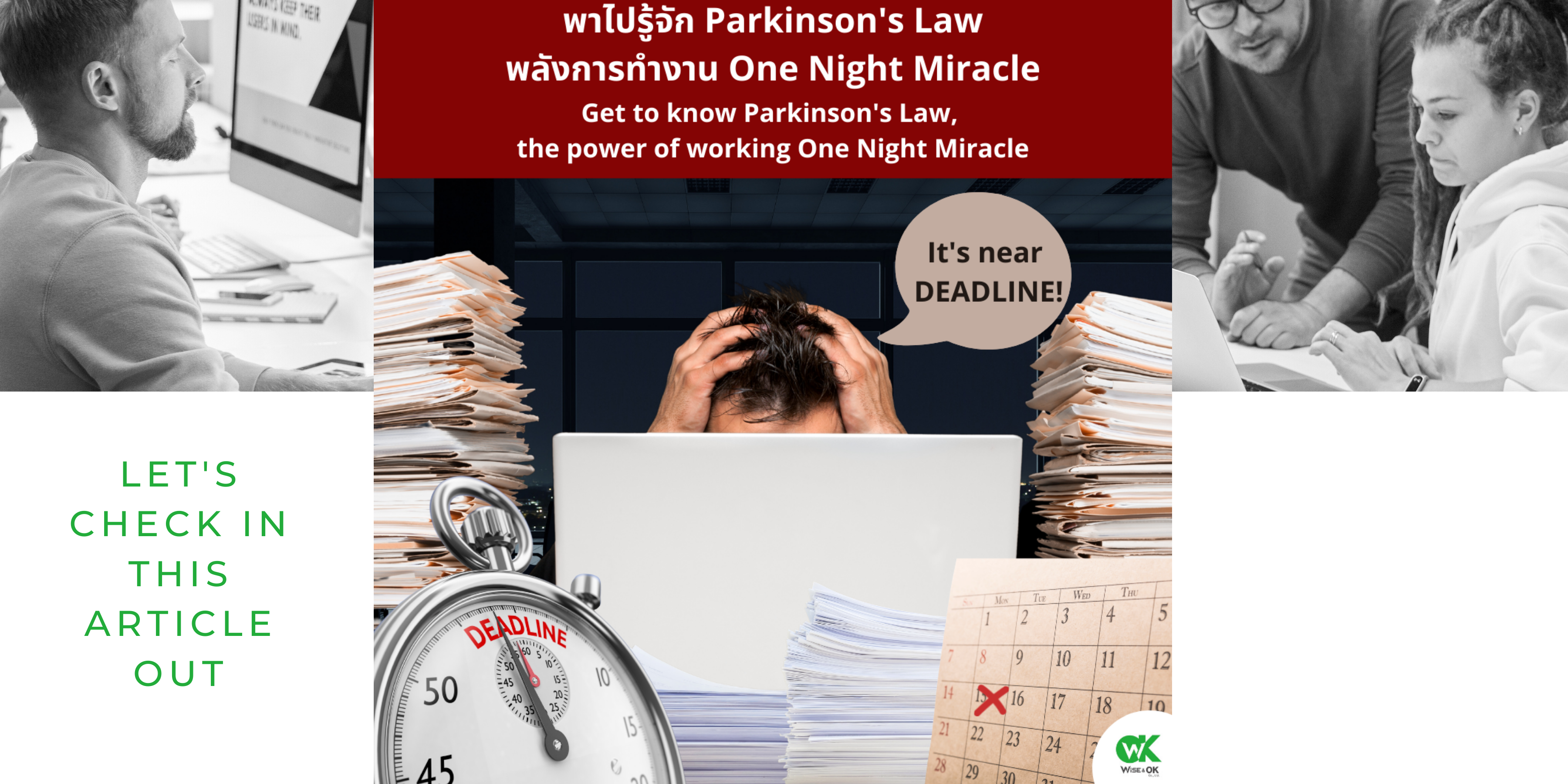 Get to know Parkinson’s Law, the power of working One Night Miracle,

If not near the deadline there is no need to rush to work!

Of course, many people would have experienced rushing to finish work at the last second. Despite the time to prepare and manage the work for days, weeks, or even months before the deadline to submit the work as they were assigned. But we decide to do it at the last second or a popular word known as One Night Miracle, of course, the quality of the work is reduced or even not finished in time. This may cause supervisors and coworkers to look at us as irresponsible and undisciplined. Therefore, the following question arises as to why do some tasks take only a few hours to complete? But if given a long period to do it many people tend to rush to work at the deadline instead. This is where Parkinson’s Law comes in, a near-deadline working principle that explains why most people rarely get their work “completed” and “on time” in advance of the deadline time.

Parkinson’s Law was first defined in the 1995 book called ‘The Economist’ by the famous British historian and writer Cyril Northcote Parkinson, who described the principle of humans favorably do when it’s close to the deadline that “The work that is done will be extended and extended until the time is still there” or humans tend to extend their working hours as long as they have time left. Therefore, there is no need to rush to get the job done right away can do it later, it won’t hurt anything. The cause of this behavior comes from what he observed during his time at the British Civil Service. He found that employees often work less efficiently because when the agency has assigned different tasks and distributed them to employees to do. Most of the time, they start doing so near the deadline. Later, when the same type of work is assigned to the employee but the delivery date is shortened employees are still able to finish on time. Therefore, the question arises as to whether why didn’t finish it in advance? to use the remaining time to do other things. This story is the source of a humorous article written in The Economist magazine in 1955 to criticize the work that used the bureaucracy.

This Parkinson’s law can be seen clearly in everyday life, such as studying, reading for exams the night before, losing weight, exercising, but we tend to do it later until we reach near the deadline. In addition, having a lot of time may make it less important or not necessary to start taking action immediately, such as planning your life for the future, financial planning, and health planning.  Therefore, it can be concluded that if we schedule the work to be completed at a particular time we will finish it. But if we continue to extend the time we will never be able to finish that. As the saying goes, “If we can’t see the deadline there will be no tears.” However, what Parkinson describes here It’s not an excuse for procrastination until the work is not finished and affects the people around. And most people like to work near the deadline because of the increased enthusiasm to complete tasks on time, even though the assignments are of the same nature. And the enthusiasm of the workers and the efficiency of their work are also different.

Although having a long working time is always an advantage as it may lead to better productivity and more efficiency. Plus, most people see it as an advantage. However, this advantage may be wasted because instead of taking the time to do other things to benefit turns out we’re spending more time than we should, so is it better? If we know how to manage the time appropriately for the work, there must be a period of time to do not too much work and not too little. Then we will have a good result and cause no trouble for colleagues and organizations. In addition, if there is an emergency we still have the opportunity to come back and fix the work right away!

Mission To The Moon https://today.line.me/th/v2/article/yDr3zk

Get to know techniques to increase sales and help customers make purchasing decisions easier through the tactics of Bulla Bulla
June 22, 2022

Virtual human technology called MetaHuman Creator, A virtual digital human that gets ready to be created as a real human
June 8, 2022

An easy way to succeed with PDCA techniques that big companies still need to follow!
May 25, 2022