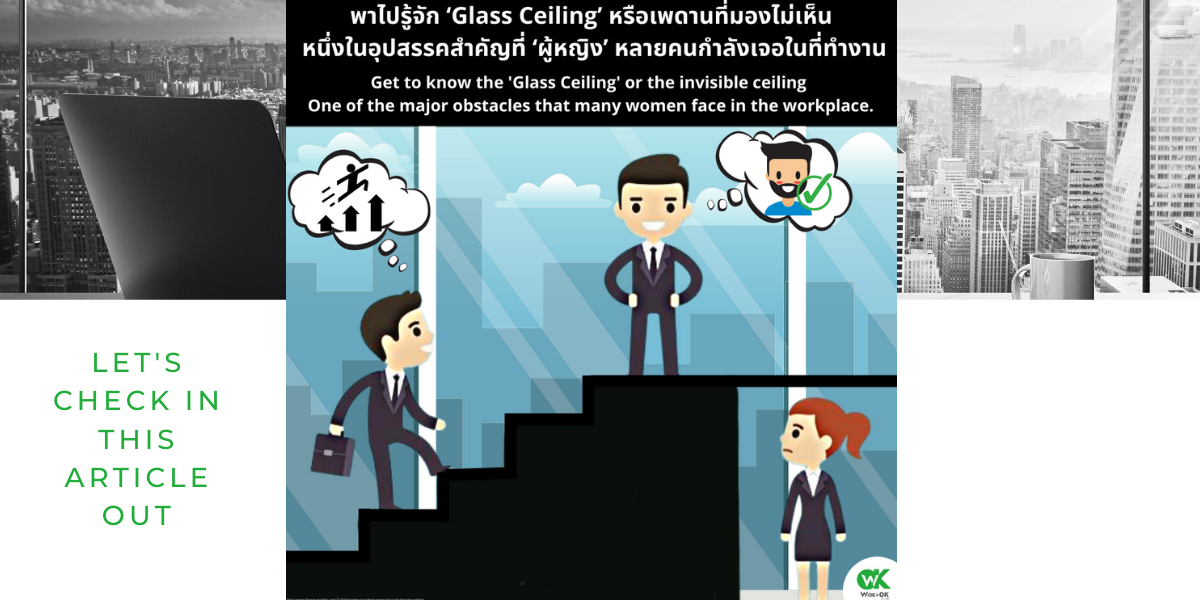 Get to know the ‘Glass Ceiling’ or the invisible ceiling, one of the major obstacles that many women face in the workplace

Have you ever watched a movie or television program that relates to work? Frequently, we have seen men characters playing a leading role rather than women characters. Plus, some stories would show the accomplishment and success of men in the world of work. However, we couldn’t deny this kind of image is something that we are usually familiar with through social media. Even in real life, ‘men’ seem to have more important roles and opportunities, especially in terms of work. This phenomenon wouldn’t have happened if there is no ‘Glass Ceiling’ or the invisible ceiling that deprives women of being promoted or accepted in the workplace.

Glass Ceiling is a metaphor to describe an invisible obstacle that detains women from being progressed to the highest position in the workplace, especially, the executive positions despite the strong potential and high capacity. However, most of these scenarios usually take place in many organizations, whether the private or the government sectors, which is considered as another problem that women around the world where gender discrimination is unavoidable. Nevertheless, many women still hope that this Glass Ceiling will suddenly be destroyed. According to Builtin, the website has given examples of key factors that contribute to the creation of the Glass Ceiling as follows:

It’s normal to see many people tend to be satisfied or be fond of people that they don’t know personally. If they have something in common, for example, they are from the same province, graduated from the same school, and admire the same hobbies. These things can be regarded as a part of human nature that we are comfortable living together due to the same nature. However, when we are entering the world of work, some organizations or companies don’t have a criterion to get promoted transparently, clearly, and rightfully. Plus, selecting is tending to get along with the satisfaction of only those decision-makers. Moreover, each decision-maker has a different opinion towards gender perspectives depending on personal feelings, things that have in common, admire the same things, or even gender perspectives in the workplace. All of these conditions lead to the consideration to determine each employee whether he/she deserves a promotion. And these kinds of scenarios are considered as the most unfair system, especially against female employees.

2) Gender roles and discrimination in the workplace

It’s undeniable that although our world is openly talking about sex, in some societies, the value of genders toward sexes is that both men and women are generalized or expected to be the same stereotype. For example, in many countries in Southeast Asia, male is expected to be working, taking money to the family, and being the head of the family. While taking care of children, cooking, and cleaning a house are unquestioningly considered as women’s duties. In terms of working, if an organization does not have a flexible policy for female employees who need maternity leave to deliver a baby, then they have to resign and turn to be a full-time housewives instead. It means they will lose an opportunity from work as well as a chance to get promoted. Because some companies might see that they don’t have enough time to dedicate to their work. In addition, sexism or discrimination against women is considered as the main issue for the Glass Ceilings. According to Pew Research Center, the results of the study that nearly 42% of women who have experienced workplace discrimination, such as receive lower wages than men even the exact same job, receive less support or assistance at work, including not being promoted or even being excluded from work.

3) The problems of sexual harassment in the workplace

Sexual Harassment is another big problem that many agencies around the world are facing to deal with since the main victims are women. Some examples of sexual harassment behavior that always happening in the workplace such as, being touched without consent, verbal and physical harassment, threatening through personal social media, and even eye-stalking. When it’s happening to women, most of them choose to not say anything or keep silent in order to avoid escalating problems. However, some women have complained to their employers to take some action on the incident. According to a website survey from Gender & Society, up to 80% of female employees who have been victims of sexual harassment at work decided to leave the company within 2 years. The main reasons were to avoid problems that had occurred and to be dissatisfied with the employer’s solutions.

However, the resignation requires them to start working in a new place, which means their opportunity to grow or get promoted would have to be extended. If they want to be promoted in the same company or keep working in the old place, they might be facing the problem of sexual harassment that they don’t know this situation will turn to themselves again.

Therefore, it doesn’t surprise that today we see many women demanding and calling justice for themselves as well as other women. To solve the problem of the ‘Glass Ceiling’ you have to dare to speak up when we or other women are going to be victims of the Glass Ceiling in the workplace. Dare to explain honestly how this problem will affect our lives, how to solve this problem, as well as strong measurements. Companies or organizations should have a standard criterion to measure the performance of employees by considering from their contributions, not unrelated working information, such as name, gender, age, nationality, other personal information in order to avoid a problem of gender bias that might happen unconsciously. In addition, training each employee about gender equality and how to treat colleagues equally, is the most important knowledge to let employees know what they ‘should’ and ‘shouldn’t’ do so that everyone will be treated with dignity and equality.

Even though the Glass Ceiling still exists, if everyone helps to break this ceiling down, in the future we might see many women receive a lot of opportunities. It means they can show their hidden capacity and be a part of the team in order to lead and help the organization reaching up to the next biggest goal!

Thankyou the information from

3 things that working people should know about ‘Sandwich Generation’
May 11, 2022

Get to know Highball, the classic Japanese whiskey drink Along with 5 benefits of drinking whiskey that you never knew existed
April 27, 2022

Get to know Parkinson’s Law, the power of working One Night Miracle, If not near the deadline there is no need to rush to work!
April 20, 2022