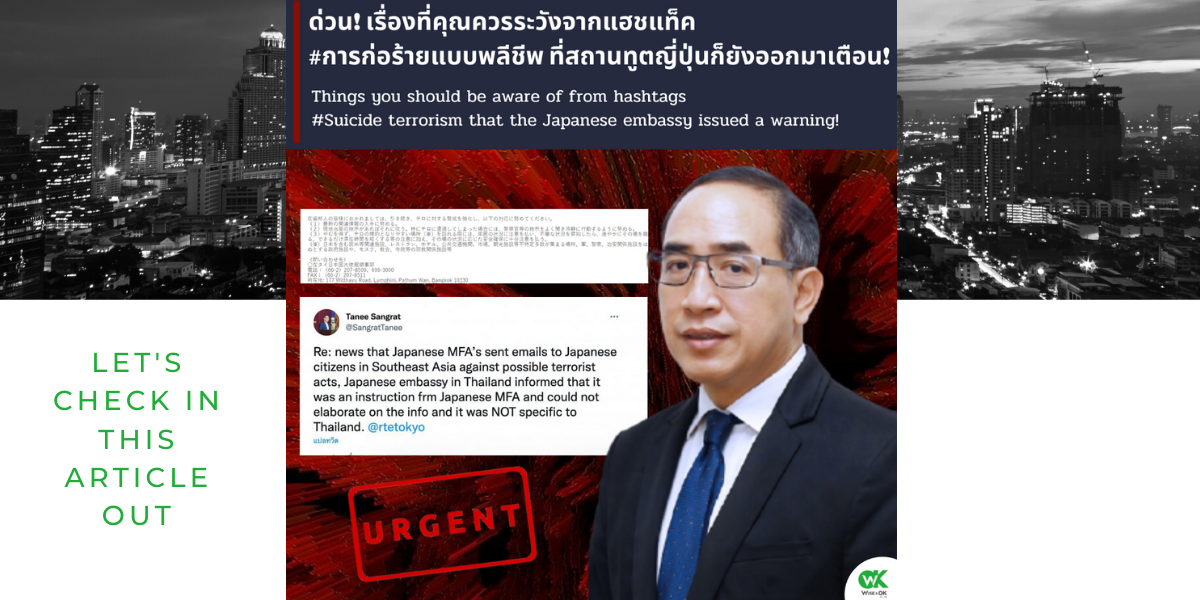 Things you should be aware of from hashtags #Suicide terrorism that the Japanese embassy issued a warning!

Recently, #suicidal terrorism has become the number one trending hashtag on Twitter that many Thais talk about. The Japanese embassy in 6 ASEAN countries which includes Thailand, the Philippines, Malaysia, Myanmar, Singapore, and Indonesia, has sent out an email warning Japanese citizens in those countries to be on the lookout. The Japanese embassy did not specify any information other than ‘suicidal terrorism’, which could be carried out in places of mass gatherings, such as religious sites, hotels, restaurants, public transport, markets, etc. As for the Ministry of Foreign Affairs of Thailand, it has confirmed that notification emails have been sent to Japanese people both in Thailand and 5 other ASEAN countries. However, although this is just a warning and many countries have confirmed that there is no news of a terrorist attack. What you should do is to be more careful with yourself because we never know if something unexpected will happen or not.

Many times we often hear the news that there is a terrorist attack. In most cases, the scene of the accident is in a crowded place. In Thailand itself a place where people usually gather, such as a place of worship, a market, a shopping mall. Which may be the target of the incident at any time so it’s a good idea to stay away from these places during this time. But if you really need to go, you should keep an eye on the situation around you and try to minimize your time there.

2)  If an abnormal event is encountered immediately notify the police

Even though the police and related agencies have increased the level of surveillance. But we should still not be careless, because the bad guys may lurk among the people. Therefore, if you see unusual events or encounter an unreliable person, such as sneaky behavior, dress to hide face too much, and have suspicious objects with them at all times. It’s a good idea to call the police and give them the details as soon as possible. After that, you bring yourself out of the place for safety. However, calling the police is something you should do, as it prevents potential terrorism. It also helps the police and government officials to prepare to cope better as well.

3) If an unexpect event happens you need to run as far as possible, find cover and crouch on the ground

If an explosion occurs the basic advice you should follow is to get out of the bomb radius as much as you can. Ready to find cover and crouch on the ground or bend down. After that, try to stay calm and get out of the area as soon as possible for your safety, because there is no way of knowing if there will be another wave of explosions or not. Which may be hiding in the same place and you could be in danger!

Kom Chad Luek News Agency had previously reported that the terrorist event Suicide bombs are considered to be the most difficult defenses by security agencies around the world, as the assailants themselves are the means of transporting the bombs and taking their lives and it makes it difficult to prevent. So when this kind of warning comes from the Japanese embassy, we Thai people, should not be ignored or perceived as not important. But we should also find ways to cope and be careful to prevent loss before everything is too late…